The Financial Secretary to the Treasury, David Gauke, today launched a campaign warning offshore tax evaders that HMRC will start to receive details on UK taxpayers from more than 90 countries, under new global agreements championed by the UK.

The government is giving people one last chance to come clean and get their tax affairs in order. The existing disclosure facilities will be replaced by a new tougher, last chance facility from 2016. Those who continue to evade will face new tougher financial and criminal sanctions.

David Gauke, the Financial Secretary to the Treasury, said:

“Hiding money in another country at the expense of honest UK taxpayers is not acceptable and we have made it clear we will put a stop to it.

“Under our new regime the small minority who evade tax offshore, facilitate or turn a blind eye to offshore tax evasion will face tougher sanctions

“With over 90 jurisdictions now agreeing to automatic exchanges of information, the net is closing in on offshore tax evaders.”

There is now less than a month for people to use the current facilities to get their offshore tax affairs in order and pay the tax they owe plus any interest due.

HMRC already analyses vast amounts of data, including through its Connect system, helping to pinpoint people who are exploiting offshore structures to evade tax in the UK. HM Revenue and Customs (HMRC) will start to receive data on UK customers with offshore accounts and trusts from Crown Dependencies and Overseas Territories next year, and over 90 other jurisdictions in 2017.

2. In the March 2015 Budget, the Government announced a package of measures to tackle offshore evasion which will bring in £565 million for the taxpayer. This includes:

3. The Budget also announced early closure of the current offshore facilities, Liechtenstein Disclosure Facility (LDF) and Crown Dependency Disclosure Facilities (CDDF) to be replaced by tougher regimes. The LDF opened in 2007 and will close on 31 December 2015. It has brought in £1.3 billion so far, which would otherwise have gone largely uncollected.

4. HMRC has already collected over £2.7 billion from previously-undisclosed offshore income.

5. 10 things you need to know about offshore can be found at: https://www.gov.uk/government/publications/ten-things-about-offshore-assets-and-income 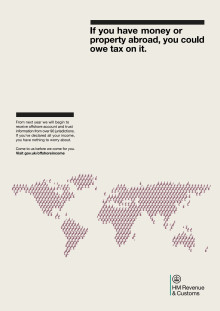 From next year we will begin to receive offshore account and trust information from over 90 jurisdictions. If you’ve declared all your income, you have nothing to worry about. 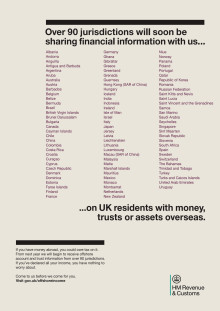 Over 90 jurisdictions will soon be sharing financial information with us...on UK residents with money, trusts or assets overseas.